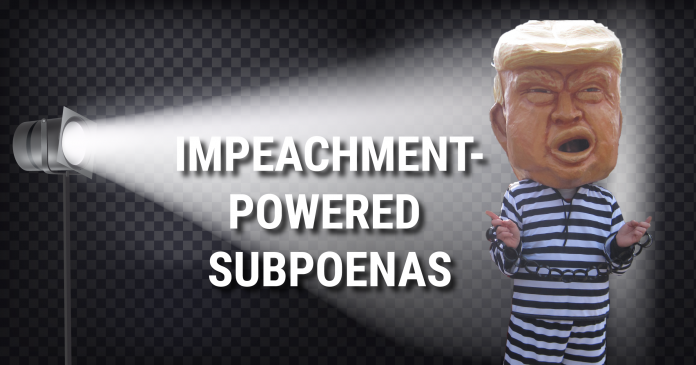 The Democrats should not assume that Nancy Pelosi’s decision to begin impeachment this week will be sufficient to bring critical documents and witnesses to the congressional oversight process. Trump has fought tooth and nail to quash each and every subpoena issued by Congress to investigate him. It  was only his arrogance, and the clarity of the whistle blower statute, that forced Trump’s hand in making the Ukraine shakedown complaint against him public yesterday.

The little known reason why the full House of Representatives needs to vote to impeach President Trump soon is that without the enhanced constitutional power that impeachment brings to the numerous subpoenas slowly making their way through federal courts, citizens may not receive evidence of Trump’s numerous crimes until after the 2020 election—if ever.

Democrats finally have the 218-plus House votes necessary to officially authorize an official impeachment investigation. Such an authorization vote was taken to initiate Nixon’s impeachment, and Bill Clinton’s as well.  For Congress to perform its constitutionally-mandated oversight function of bringing evidence to light about Trump’s crimes and misdemeanors about the Ukraine—as well as his likely top secret Russian loans, Pelosi needs to bring such a vote to the floor as soon as the full House reconvenes.

If she fails to do this, the Supreme Court may decide that Trump does not have to comply with Congressional subpoenas for critical testimony over the Ukraine, or his accounting firm’s files, or his Deutsche bank records (which are likely to divulge hidden loans from Russian oligarchs). Although House Committees have already won a number of federal district court rulings over their right to subpoena documents and witnesses, Trump’s lawyers immediately appealed these decisions to appellate courts. If he loses there, Trump will continue to prevent federal officials from testifying, and continue blocking the release of financial information, while waiting for the Supreme Court to hear his appeal.

The future of America’s system of checks and balances may depend upon the tie-breaking vote in a congressional subpoena case that is cast by a single Supreme Court judge—Chief Justice John Roberts. Roberts has demonstrated that he is the only one of a five Republican-appointed majority who is willing, even just a few times, to rule against Trump’s dictatorial actions.

Roberts’ vote may hinge upon whether or not the test case over congressional subpoenas are part of an official impeachment investigation. If they are, there is little wiggle room for an honest judge to oppose them, because the power to investigate during impeachment is explicitly granted to the House in Article I of the Constitution. If the House votes to begin impeachment, it is hard to imagine Chief Justice Roberts rejecting Congress’ subpoena for testimony from Mike Pompeo or Rudy Giuliani about their secret Ukraine meetings, or from Deutsche Bank for Trump’s records.

This is why a full House vote to investigate for impeachment, and the subpoena-power this conveys, is needed. Moreover, Pelosi would be remiss if she continues to insist, as she has suggested, that the investigation only looks at the Ukraine shakedown scandal. This will just add fuel to Trump’s bonfire of deceit that the Mueller investigation, his contacts with Russia and their meddling in the 2016 election and his clearly illegal acts of obstruction of justice regarding the Mueller investigation,  are unworthy of further scrutiny.

And narratives are important. Very important. Indeed, the purpose of empowering the public, through the impeachment investigation is not to win a vote a two-thirds vote in the Senate to remove Trump from office, which, given the depravity of his lawless Republican enablers, is unlikely.

The ultimate purpose of the impeachment investigation is to empower the public with information about Trump’s secret crimes so that we, the people, can remove him from office in a landslide 2020 election that is a patriotic rejection of Trumpism and the autocratic, lawless corruption of our government that it represents.

But instead of making the strongest case, House Speaker Nancy Pelosi is neglecting to bring a vote to the full floor, where a clear majority will definitely now vote to support an impeachment investigation, and she only wants to focus on the Ukraine scandal. This must come as a shock to Robert Mueller, whose thorough investigation laid Trump’s impeachable crimes out on a silver platter for Congress. His report’s evidence was so compelling that more than 1,000 former U.S. Attorneys signed on to the statement, “Each of us believes that the conduct of President Trump described in Special Counsel Robert Mueller’s report would, in the case of any other person not covered by the Office of Legal Counsel policy against indicting a sitting President, result in multiple felony charges for obstruction of justice.”

Pelosi’s current strategy—a generous term for the sucker’s game that House Democrats find themselves in as they battle Trump’s citadel of secrecy—is to bet the farm that House Committees can effectively investigate the President without ever officially voting for impeachment.

This highly risky approach has never been upheld by the Supreme Court.

On September 13, in resisting a subpoena from the House Judiciary Committee seeking grand jury testimony from the Mueller investigation, Trump’s Justice Department filed a motion that demonstrates how they intend to neutralize all Congressional oversight subpoenas. It echoed Trump’s widely publicized “political witch hunt” narrative, noting that the House has never voted to impeach. The filing stated, “The committee’s own description of its investigation makes clear that it is too far removed from any potential judicial proceeding (such as impeachment) to qualify.”

Because House Committee subpoena cases are not part of an official impeachment process, they do not bear the weight of urgency, and therefore may not reach the Supreme Court until after the election.  Or worse. Absent a House impeachment vote, a subpoena case might be decided by the Supreme Court in Trump’s favor, giving him the opportunity to crow about another “big win” against congressional “witch hunters.”

Michael Stern, who served as Senior Counsel to the House of Representatives from 1996 to 2004, recently published a little-noticed article for the Just Security website titled, “How Impeachment Proceedings would Strengthen Congress’s Investigatory Powers.” Stern wrote, “an impeachment inquiry establishes with greater certainty the congressional need for evidence that bears upon the conduct of the office holder in question and any high crimes and misdemeanors he may have committed. The Executive Branch has long maintained that Congress’s need for information for ordinary legislative purposes is diminished because legislation can be crafted without a detailed understanding of any particular factual situation… the legislative need for information is less compelling when it is merely for oversight purposes.” This is what Trump’s lawyers have argued in a number of their subpoena-quashing lawsuits.

But this challenge disintegrates after the torch of impeachment oversight is activated, Stern explained, “If the House is seeking information for an impeachment inquiry, however, it is exercising a judicial function and should be entitled to the same presumption of a “right to every man’s evidence” that applies in the context of a federal court or grand jury proceeding. Just as the Supreme Court held in United States v. Nixon that a court’s need for information in a criminal case overcame the president’s assertion of executive privilege for White House tapes, the House’s need for relevant information in an impeachment inquiry would entitle it to access to information presumptively protected by executive privilege.”

“The framework,” Stern concluded, “is clear. The committee must demonstrate that it seeks the information for impeachment, rather than merely oversight, purposes, a showing that is more difficult if impeachment proceedings have not even commenced.”

0
Last week, Trump decided to double down on his campaign to attack Biden’s religious faith, spreading the lie that Democrats refused to say the...
Read more