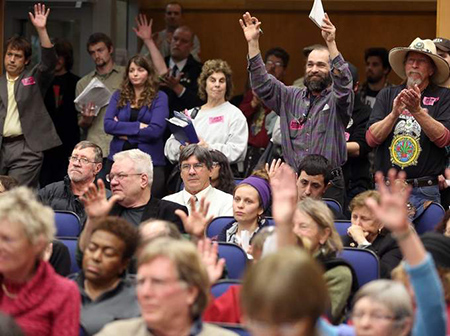 (This article first appeared in the Santa Rosa Press Democrat).

You don’t need to be a revolutionary to be disappointed with our federal government. Even as catastrophes such as Hurricane Sandy and the Newton, Conn. massacre threaten the ecological and humanistic foundations of our civilization, even as glaciers melt and environmental disaster looms, our federal government moves at a glacial pace. “Change We Can Believe In,” from Washington, is close to becoming an oxymoron. Modern America’s largest institutions, our federal government and the mega-corporations whose profits seem to be its primary concern, are failing, even as the health of our people, and our planet, is being destroyed.

Like many, I have come to feel that the most meaningful change we can bring about is within each of us, as well as, politically, the communities that we are part of. Here in Sebastopol (“Peacetown, U.S.A.”), and in Sonoma County, we are experiencing a resurgence of change we can truly believe in, through responsive government.

This means government that works for the people in the community that it governs. Not for the largest corporations with the biggest lobbying muscle. Not for the police/prison industrial complex, which plays on our fears to expand its authority and budgets by criminalizing the victimless behavior of our fellow citizens.

Two recent events encourage me that our elected representatives in Sebastopol and Sonoma County are practicing responsive government.

Most recently was the 5-0 vote at the first meeting of Sebastopol’s new populist majority City Council to ban drive-through windows. Sebastopol banned these for restaurants in 1994 but neglected to mention pharmacies. The unpopular CVS development, at the traffic chokepoint of our community, planned to exploit this loophole.

As they did last summer, when CVS’ developer convinced three out of five council members that Sebastopol would be sued if they did not override our city’s Design Review Board, Armstrong Development threatened legal action should our council vote to ban drive-through windows. (A lawsuit was filed earlier this week.)

Drive-through windows cause enormous carbon monoxide emissions from idling cars, but they are the economic driver behind new CVS developments.

A wide majority of Sebastopolians believed that the CVS project was bad for local business, traffic and ecology. We voted accordingly, electing two candidates who vigorously opposed the project. As a result, lawsuit threats and the lie that what’s good for Wal-Mart is good for Main Street, failed.

Sonoma County witnessed a similar 5-0 vote by the Board of Supervisors on Dec. 11. After 200 irate citizens showed up to denounce a hastily-drafted bill that would have reduced the permitted number of marijuana plants for licensed growers from 30 to six, and in the process, made criminals of hundreds of our neighbors, the bill was voted down by the very supervisors who proposed it.

In the process, taxpayers learned that our Sheriff’s Office increased marijuana arrests by 250 percent since 2006. It now spends $2 million annually enforcing marijuana prohibition. The new law could have doubled this cost. Meanwhile, to save just $650,000 a year, our 13 county libraries remain closed on Mondays for the first time in history.

If you polled taxpayers as to whether we would like to restore library hours or cut back on $2 million for pot busts, probably 80 percent of us would choose to restore library funding. That our supervisors never have to publicly vote on whether to fund libraries or our sheriff’s war on marijuana is an indication that responsive local government still has some way to go.

But we are off to a good start.

Jonathan Greenberg, a journalist and author, is the founder of Progressive Source Communications, Progressive Sebastopol and www.KnowGMO.org.