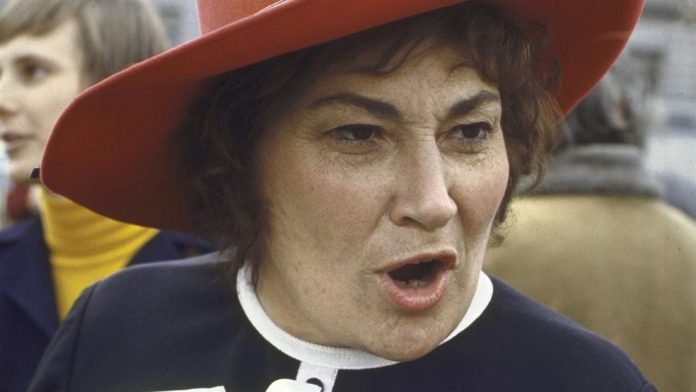 (This article originally appeared in The Sonoma Independent on November 2, 2019)

Bella Bella, the new off-Broadway play about the indomitable 1970’s congressional titan Bella Abzug, feels timely and significant in this, the season of Donald Trump’s impeachment.

In early 1972, Bella made history because, as Hillary Clinton wrote in a Facebook post that coincided with the play’s opening on October 22, “In the midst of a crisis in our democracy with eerie parallels to our current moment, Bella Abzug was the first member of the U.S. House of Representatives to speak out in favor of impeaching President Nixon.”

“At the time, Clinton wrote,  “I never pictured myself running for office. Bella inspired me because she was one of the few women who was in the thick of political and policy decisions.”

Bella Bella, a savvy one-person play, written and starring a simply dressed Harvey Fierstein as the powerhouse New York Congresswoman, uses Bella’s speeches and writing to describe the political vision of a trailblazer who was a pioneering crusader for racial justice, women, lesbian and gay rights, and an end to the Vietnam war.

Nixon, Bella reflects in the play, “wastes billions of tax payer dollars dropping Napalm on innocent Vietnamese but child-care is fiscally irresponsible. And that brings us to that paragon of boys club corruption – Gerald Ford – and the glory of Watergate. Years of investigations, hearings, trials…Dragging the truth out of those traitors detail by detail… All to prove that no one, not even the President of the  United States, is above the law.”

As we approach the exciting possibility of Elizabeth Warren as our first woman President, the words of Bella Abzug illuminate the advantages of sending the “old boys club” government packing. Shortly before Trump was elected three years ago, I wrote a column for the Huffington Post titled, “Trump Manifests Everything Wrong with American Men and Shames Our Gender.” From my perspective as a post-feminist man, raised as a child of the sixties by a liberated artist mother in Bella’s district of downtown Manhattan, I called Trump “the living, fire-breathing, fear-evoking, hate-mongering, violence-threatening, sexist, racist, misogynistic, xenophobic, avaricious, insecure, intolerant, egomaniacal, bombastic, braggadocios, greedy sexual harassing manifestation of everything that is wrong with American men.”

Bella, Bella gets right to the core of why our nation would benefit by replacing a Chief Executive who embodies toxic masculinity with one that engenders the caring, compassionate values of a matriarchy.  “No one’s looking to replace   the male white elite with a female white elite,” Bella says in the play.

“Men see things as they are,” Fierstein’s Bella explains. “But women consider possibilities. We negotiate. We cross party lines looking for answers. Men will tell you that there’s no peace without security while women understand there’s no security without peace.”

It was my friend Liz Abzug, Bella’s daughter, who first approached Harvey Fierstein, the Tony Award winning writer of Torch Song Trilogy and La Cage Aux Folles, to create a play about her mother. The pair approached a number of well-known actresses, including Patti LuPone and Better Midler, to play Bella, but when they were too busy, Fierstein and Liz Abzug realized that Fierstein himself, without make-up or costume, could handle the part—and he does so convincingly and eloquently.

Liz, the founder of the Bella Abzug Leadership Institute, a 15-year old girls and young women’s empowerment organization (whose Board of Directors I serve on), believes that Fierstein and Bella share a strong sense of humor and witty charm. This humor makes the poignant politics of Bella Bella’s 85 minutes move quickly, with gems like this anecdote. “So I applied to Harvard (Law School). Hey, if I was going to be this mythical creature, a female Jewish lawyer, I’d better be flashing some fancy bona fides. So I wrote them a nice letter. And they wrote me a nice letter back, ‘We don’t accept women.’ There’s a lot packed into that sentence.”

“If my mother was alive today,”  Liz Abzug says, “she would have been there right away calling for Trump’s impeachment. This year Elizabeth Warren called for impeachment early on. She has intelligence, guts and the strength to say, ‘this is what we need to do for honest government!’  Warren calls it as she sees it, with intelligence, guts and vision, just like Bella!” 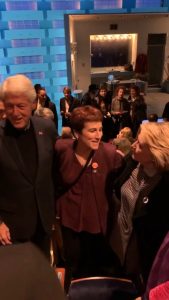