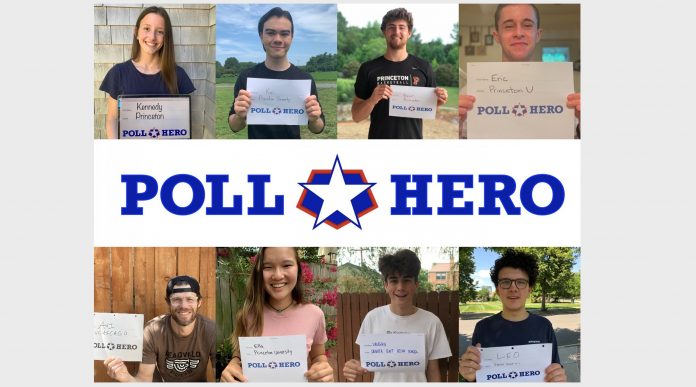 A new Supreme Court ruling lets the votes in Pennsylvania be counted up to three days after polls close on Election Day, as long as the ballot is postmarked by 8pm on November 3, so more poll workers are needed to count all the ballots.

Due to COVID-19, about 250,000 poll workers will be sitting out this election, based on data from Pew Research, as the average age of a poll worker is 62 years old, a demographic that is at greater risk of catching COVID-19.

Luckily, there are some students from Princeton University that, on August 8, 2020, launched the Poll Hero project which is recruiting students to help at the polls and to date, has recruited 35,000 high school and college students as poll workers across eight states and 18 cities. Other organizations, like Lebron James’s project More Than A Vote, which has recruited over 10,000 poll workers, and Power the Polls, are also working to increase the number of poll workers across the country.

Philadelphia initially needed 8,500 poll workers, but by September the city had 20,000 people sign up through various organizations. But in other places across the state and the country, more poll workers are still needed.

As of Oct. 21, 2020, Poll Hero signed up a total of 2,554 poll workers across Pennsylvania, (1,118 of those are in the Philadelphia region) however with the new Supreme court ruling, more poll workers are needed.

Across the country, states are short poll workers because of COVID-19, and will need as much help as possible for a smooth election process.

Poll Hero was started by Princeton undergraduates and a University of Chicago undergraduate along with their siblings who are still in high school. The initial founders, Avi Stopper and Kennedy Mattes, met while working on a voting by mail internship together.

Mattes said they had heard about shortages of poll workers across the country, like in Philadelphia, and wanted to help.

Mattes said the reason she is excited to be doing this work is because it allows for more people to vote and lets more people participate in democracy.

“When people have to wait in line, that functions as a poll tax through opportunity cost,” Mattes said. “A lot of people, if they aren’t able to dedicate a few hours to standing in line to vote, they lose that opportunity to participate in democracy. Our impact is to give many Americans the right to vote, even if they didn’t have that opportunity in the primary.”

From a team of five volunteers, they have since grown to a team of 60 and are working to hire more volunteers up to November 2.

The work of Poll Hero was an inspiration for some, as the daughter of Laura Wooten, who was the country’s longest African-American serving election poll volunteer, reached out because of what Poll Hero was doing.

Wooten’s daughter told the founders of Poll Hero at Princeton that what they were doing was “To preserve [Laura Wooten’s] legacy, which was to have young people go out to vote and for young people to be poll workers.”

The organization awaits your call to ensure there will be enough poll workers by Election Day, so make sure to contact them via their website and they will get back to you to guide you through the whole process. You can also reach them through Twitter  at pollheroproject.

Poll workers are required for early voting, on election day and post elections. Their duties cover the full spectrum of an election cycle, from guiding people to the right poll, verifying ID and counting the votes. Training is provided by your local county polling location and you’re paid for your work, which varies from county to county.

You must be 16 years or older to qualify and live in the state you’re signing up for. It’s a great way to learn about the political process while being paid.

It’s no secret that this is one of the most important elections of our lifetime and, compounded with the COVID-19 crisis, America needs this election to run smoothly, with the help of as many poll workers as possible. You can be part of history and make some money, so contact Poll Hero to join the movement.

Trump Manifests Everything Wrong with American Men and Shames Our Gender

0
(This article originally appeared in The Huffington Post on September 28th 2016)   Donald Trump brings shame to our entire gender. He is the living, fire-breathing,...
Read more