Blog
Share
Facebook
Twitter
Linkedin
ReddIt
Email
(This post first appeared in the Huffington Post on November 11, 2012).
The populist campaign to label genetically modified food has been successfully swift-boated by Monsanto and the largest pesticide and junk food companies on earth. Our consumer movement made the costly mistake of arming itself with peace signs and love beads for what turned out to be a gunfight with a ruthless, assault rifle-equipped enemy.

What can we do about it? We can learn from our mistakes for the next necessary round in our struggle for food safety and environmentally responsible agriculture. Ronnie Cummins, the fiery head of the Organic Consumer’s Association (the top fund collector for California’s Prop 37 to label GMO’s), made it clear that when it comes to GMO labeling, citizens are not giving up. “Dirty money and dirty tactics may have won this skirmish,” Cummins said, “but they will not win the war.”

The big problem that we, the American People, now have is that big money has come to dictate political speech in America. Like a cancer spreading across our nation’s body politic, the mega-corporate financing of deceptive TV ad campaigns has become the predominant manner in which a majority of voters are “educated.” Or, more frequently, mis-educated.

In 2004, multi-millionaires supporting George Bush’s re-election created “Swift Boat Vets for Truth.” They spent many millions advancing expertly-crafted, lying TV ads stating that presidential candidate John Kerry, a Purple Heart-winning combat officer who had volunteered to fight in Vietnam, betrayed his country. These well-financed lies shifted the national campaign “narrative” to Kerry’s justification of his wartime record, away from the clear facts that President Bush lied to the American people to get them into an unpopular war in Iraq. And away from irrefutable evidence that his politically powerful father pulled strings so that he could evade military service during the Vietnam War.

The Swift Boat style ads uprooted the Label GMO narrative from consumers “Right to Know,” to the No on 37 Campaign’s carefully-crafted, fear-inducing slogans of a “Deceptive Labeling Scheme,” and “Shakedown Lawsuits,” and ‘Higher Grocery Bills.” With Monsanto-financed junk science, “experts,” data, and a million dollars a day of TV ads, No on 37’s propaganda successfully “re-educated” millions of Californians. 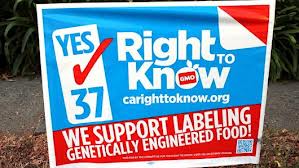 Despite a poll at the beginning of this year finding that 91 percent of Americans support labeling genetically modified (GMO) food, Prop 37 was defeated on Election Day by a vote of 53 percent to 47 percent.

Although I have collaborated with funders, volunteers and few staffers of the California Right to Know Prop 37 campaign, the views expressed here are solely my own. I write this a veteran communications professional who created and funded the http://www.KnowGMO.org effort of “People Powered Media to Counter Deceptive Corporate Ads.”

In a nutshell, we need to take off the kid gloves. The next time we head into the public ring with some of the highest paid, most sinister corporate propagandists on earth, we are going to need to hit a lot harder than the Prop 37 campaign’s multi-million dollar TV ad blitz, whose motto was, “Food is Love. Food is Life. Food is Family.”

Next time let’s disregard the in-house polling in which citizens suggest that they do not want to vote for a negative campaign. If that were true we would have won this vote in a landslide. If we have evidence of likely health hazards — which we do with GMO’s — we should not be afraid to warn people about them.

We also need to use grassroots volunteers — not to raise money, but to spread awareness, using their authentic voices. And we should expect to be outspent and outgunned, as companies like Monsanto will buy ten times the ads we can, insist on better time slots for them, and pay their advertising experts ten times what we will. We should refute their lies the day they appear, and use the social networks of our supporters and what advertising we have, to control the narrative and bring it back to public health concerns.

Previous articleLibrary Funding Campaign
Next articleShame of Sonoma County: Supervisors Fund Escalation of War on Marijuana Instead of Libraries