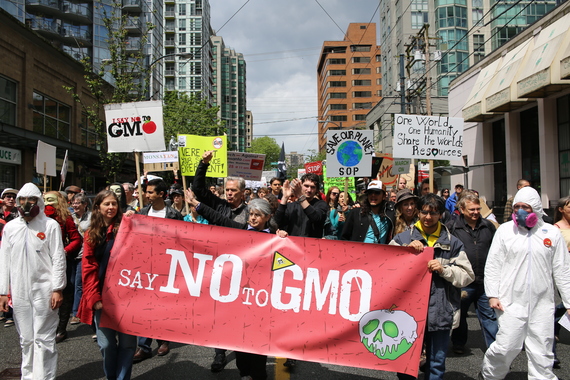 As I listened to the ads from the ill-fated campaign to label genetically modified food in Washington, I felt a sickening case of déjà vu. About a year ago, I wrote a controversial article for the Huffington Post, titled “Ten Grassroots Lessons From Monsanto’s Swift Boating of the Prop 37/Label GMO Campaign.” To my disappointment, Washington’s campaign was making the very same communications error that doomed our effort in California in 2012. And it ended the same way: an initial poll showing 90% of the public supporting labeling was reduced nearly in half, to below 49%, and the ballot measure failed.

What I suggested then–and repeat now–is that the decision, by the label GMO campaign managers, to ban all references to food safety and public health, was a lethal error. When up against the better funded, eager-to-deceive Monsanto propaganda machine, it was like entering a gunfight against an assault-rifle equipped enemy while armed with love beads and peace signs.

A New York Times poll released in July showed that some 93% of Americans want labels on genetically modified food, “with most of them worried about the effects on people’s health.” This makes a lot of sense, considering that about 90% of all corn in the United States is grown from seeds genetically altered to contain a pesticide, one that has been proven to remain in our bloodstream long after it is eaten.

Yet in Washington, as in California, the anti-GMO professionals managing the $7.8 million‘Yes on 522″ campaign focused their messaging solely on a consumer’s “right to know” what is in their food. As communications expert Ritch Davidson noted last year, the big problem is, “They’re telling us we have a right to know but not why we want to know.”

When I spoke to some of the key organizers behind California’s Right to Know Campaign, they said that their initial “polling showed” that voters do not respond well to “negative” ads. And that talking about health concerns like widely shared consumer worries that genetically modified food might increase the likelihood of cancer, allergies and other illnesses, was negative. Which was why they refused to allow onto the video section of the Yes on Prop 37 website a single one of the hundreds of ‘person on the street’ videos that our volunteer KnowGMO.org effort had collected in California. Most consumers told us that they wanted to label and avoid GM food because of health concerns.

Sadly, the Yes on 522 campaigners in Washington followed California’s losing “right to know” playbook. “Staying positive,” for the Washington Campaign, meant forbidding any mention of food safety and health in any of their ads (like this one here). Or even on their website, where F.A.Q. response #10, wins the Grand Prize for Wimpy Liberal Tactics: in response to their own Frequently Asked Question about why labeling is necessary when “studies that show there are no effects of genetically engineered foods on humans,” the Yes on 522 Campaign would not argue that the only long term study of more than a few months found increased cancer among laboratory mice. Or that the F.D.A. has never studied the impact independently, but instead accepts Monsanto’s studies as gospel. Or that patients prescribed non-GMO diets have seen dramatic recoveries from a number of illnesses. Or that the F.D.A.’s “food safety czar is a former high ranking Monsanto executive. Instead, the Washington campaign’s non-answer was, “Initiative 522 is important first step because Washington shoppers should have the right to know what’s in the food they and their families eat.”

Meanwhile, the Monsanto-led No on 522 campaign, with a $22 million war chest made possible by a food industry’s Hall of Shame, took to the airwaves with the same deceptivenegative messages that had worked like a charm in California. Despite the fact that what their ads warned of never happened in the many other nations that sensibly require GM food labeling, they argued that labeling would cost consumers hundreds of dollars, create confusion, and hurt farmers and small businesses. So insipid was the Yes on 522 campaign that, like the California campaigners, it again ceded the “public safety” ground to the anti-labeling campaign. Again, just as they had in California, Monsanto and its allies remarkably claimed to be faction standing up for public health. In this slick TV ad for the No on 522 Campaign, a “Registered Pediatric Dietician” expresses grave concern over the impact of “misleading labeling.”

It is worth noting that the most persuasive voices in the struggle to protect our bodies, families, and planet from the potential dangers of genetically modified food are often mothers who make health hazards front and center in their reporting. The tireless food safety blogger and author Robyn O’Brien, who writes the “Inspired Bites” blog forPrevention, regularly ties GMO’s to health issues, such as this report on a major study released in July. At the more radical end of the activist spectrum is Orange County mom Zen Honeycutt, who started Moms Across America, which organized 172 anti-GMO parades in 44 states. Her latest blog post a few days ago expressed outrage, not restraint, over the health implications of GM food: “Our Sick Children are Collateral Damage in War for Power.”

The self-defeating mythology among professional activists against “going negative” is made worse by a refusal, on the part of many activists, to criticize “people who worked so hard” (and spent so much donated money) on the campaigns. The desire to provide a positive spin on the results of the two failed initiatives to label GMO’s ignores the need to learn from the mistake of avoiding consumer health concerns, presumably because organizers want to encourage activists to “stick with it” next time.

Next time is already underway in both Colorado and Oregon, where groups are working to get labeling measures on state ballots. It is not reassuring to note that they are calling their efforts Oregon Right to Know, and Right to Know Colorado.

It’s time to shift tactics and follow the “lead with the negative” example that Monsanto’s much better paid experts have set. Perhaps for the next election season, campaign organizers will wake up to reality. If they could re-orient the campaigns to create “Right to Safe Food”-focused initiatives, fewer voters would be swayed by Monsanto-funded deceptive ads.

Like millions of parents and activists who oppose genetically modified food, I feel that the stakes are very high in this battle the safety of our world’s food supply. If we are to win it, we are going to have to fight tougher. And smarter.