Progressive Source Communications
Home Trump Video: 12 Indicators That Trump Would Create a Fascist Dictatorship in His... 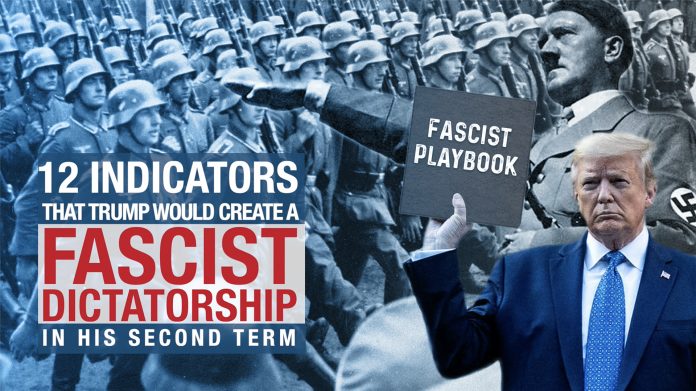 Narrator: With just one more supreme court appointment, which is inevitable during the next four years, because Justice Ruth Bader Ginsberg is now eighty-seven, Trump will be given a rubber stamp to exercise the limitless power, he believes he is entitled to.

Based on Trump’s past words and actions, these are the 12 Indicators that Trump would replace our democracy with a fascist dictatorship in his second term .

Trump: I am your president of law and order.

Narrator: 2. Trump persistently lies about voter fraud, setting the stage for him to use emergency powers to seize control of the election, or to challenge results if he loses.

Trump: I’m not going to say which party does it, but thousands of votes are gathered and they’re come in and they’re dumped and then all of a sudden you lose elections that you think you’re gonna win.

Narrator: 3. Trump has repeatedly suggested that he might remain in office after his second term ends.

Trump: He’s now president for life… Maybe we’ll have to give that shot some day.

Narrator: 4. Trump believes he has the dictatorial power to outlaw speech that is critical of him, and calls the free press, “the enemy of the people”.

Tucker Carlson: Why haven’t we had mail-in ballots for the last 230 years? Maybe the reason is mail-in ballots are an invitation to widespread fraud and manipulation and if you wanna rattle people’s faith in the system that we have for centuries, maybe you would do that.

John Oliver: Your premise that voting by mail is a new idea that would shatter democracy is in fact completely wrong… We’ve had voting by mail since the civil war, and one in four Americans actually cast a mail ballot in the last two federal elections.

Narrator: 6. Trump believes that he has the power to do whatever he wants, regardless of congress, or the nation’s courts.

Trump: When somebody’s the president of the United States, the authority is total, and that’s the way it’s gotta be.

Reporter: Total, your authority is total?

Narrator: 7.  Trump believes that as the Chief Executive, he owns our government, and can fire any official who defends the law.

Trump: I said who appointed him and they said president Obama I said look I’ll terminate him.

Amy Klobachar: Right at the time as he is doing a critical investigation regarding the arms sales to Saudi Arabia.

Narrator: 8.  Trump uses federal prosecutorial powers to investigate his opponents, and anyone who dares to scrutinize his many crimes.

Trump: China, should start an investigation, into the Bidens.

Narrator: 9. Trump viciously attacks his critics, and has publicly implied that the Ukraine whistle-blower should be hung for treason.

Trump: Who’s the person who gave the whistle-blower the information? Because that’s close to a spy. You know what we used to do in the old days when we were smart, with spies and treason, we used to handle it a little differently than we do now.

10: Trump has messianic delusions that are supported with religious fervor by millions of his supporters.

Rick Perry: I know there are people that say, you know, that you say you were the chosen one. I said, you were.

Narrator: 11. Trump subscribes to a doctrine of genetic superiority, and incites racial hatred to scapegoat immigrants and gain power.

Trump: They’re bringing crime, they’re rapists…  Do we believe in the gene thing, I mean I do… you have to be born lucky in the sense that you have to have the right genes… maybe it’s just something you have you know you have the winning gene… you know I’m proud to have that German blood there’s no question about it.

Trump: Maybe he did. Maybe he didn’t… I have president Putin, he just said it’s not Russia… Great personality, and very smart…. He speaks and his people stand up at attention, I want my people to do the same.

0
Last week, Trump decided to double down on his campaign to attack Biden’s religious faith, spreading the lie that Democrats refused to say the...
Read more