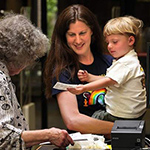 Since August 2011, my two young children, along with hundreds of thousands of Sonoma County residents, have been deprived of the use of our public libraries on Mondays and evenings. A decline in earmarked real estate taxes resulted in an ill-advised, unprecedented 25 percent cutback in weekly hours, from 52 to 40.

As a result, our much-loved 11 county libraries are overcrowded during their reduced opening hours. Meanwhile, the number of children participating in library programs has fallen by more than 12,000 a year. Seniors, children, parents and the needy are the hardest hit by this significant failure of local government, for the first known time in more than a century, to adequately fund this vital public resource.

Yet not a single one of the well-paid members of our county Board of Supervisors chose this week to take any responsibility for addressing this budgetary shortfall. Instead, they passed the buck and made excuses, arguing that addressing this historic crisis is simply not their responsibility.

Four supervisors told me that a 1975 joint powers agreement between Sonoma County and the cities that host the library system creates a dedicated real estate funding source that relieves them of any responsibility to address shortfalls.

They ignore the fact that the same agreement places the creation and augmentation of that funding source squarely on the county’s shoulders. As well as a clause in the agreement that ensures libraries hours would not be diminished (in 1975, most of our libraries were open more than 52 hours per week)

Our supervisors just approved $1.3 billion in countywide spending, including $380 million from the general fund. Supervisors claim that as custodians of our relatively wealthy county’s budget, they have more urgent things to do with our tax dollars than find the $1.3 million that it would cost to restore hours for the county’s most widely used public facilities.

I reviewed our county’s just-passed 2013-2014 budget. What I learned leaves me feeling that what is lacking is not tax dollars but accountability, political will and leadership.

One big surprise is that the county Probation Department, which spends a significant portion of its budget for non-violent parolees, has a budget that is about four times the size of all the county libraries put together. What does this say about the priorities of our community? Probation just received a $2.7 million increase; half of this increase in spending would have restored library hours.

Our Sheriff’s Office received an $8.8 million increase, and a last-minute $240,000 from the county’s contingency fund to pay for a federal marijuana eradication officer whose position had been cut back from federal funding. The Sheriff’s Office recently disclosed that it has increased marijuana busts by 250 percent since 2006, costing taxpayers an additional $1.3 million or so annually. Trimming just one-sixth off the sheriff’s requested increase would have been sufficient to restore hours for all 11 libraries.

Then there are big ticket tech costs: $3.9 million for a county budgeting software system, and $1.5 million toward a $6 million telecom upgrade. Could some of this wait for a year while the supes restore library hours to 250,000 card-holding citizens?

Lastly, the budget also includes the hiring of two new administrative positions that the supervisors “need” for their own staff, at a cost to taxpayers of more than $200,000.

Just before the supervisors voted for this budget, I delivered the petition I had contacted them about a month ago, linkable from www.RestoreLibraryHours.org. It contained the names and comments of 1,776 county residents urging supervisors to use their budget authority to restore funding for library hours.

If our supervisors believed in practicing “responsive government,” they would have voted accordingly. Instead, their unwillingness to vote for emergency library funding was a clear, and shameful, no.

Jonathan Greenberg, an investigative financial journalist and author, is the founder of Progressive Source Communications in Sebastopol.